I would like to share one of my Makan 'Mis-adventure' which started on a fateful Wednesday afternoon. My hubby and I were travelling along the Jalan Sungei Besi, our tummy were rumbling and we were hungry as a wolf. It was the dead hour to look for food and my hubby suggested we try out the popular bamboo noodles shop along the highway.

Many good reviews have been written about this place, so I decided to check them out that day. As I was rushing to be back home and there is another kiddo at home waiting to be fed, I took a takeaway or tapau for lunch. I decided to try out the 2 different version with a soup and dry noodles but both with char siew & wantans. 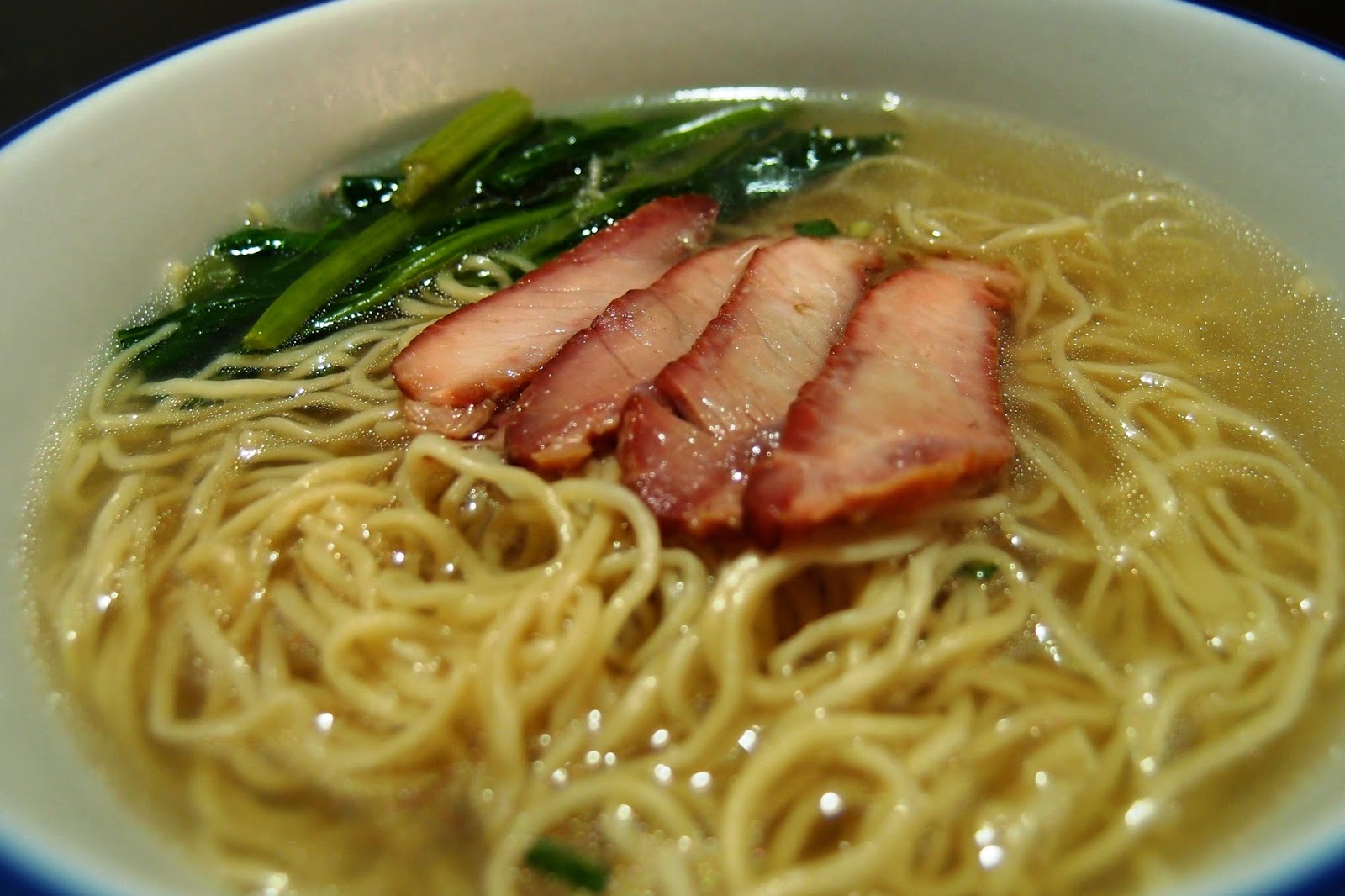 I was totally disappointed by the char siew serving as you can see my bowl of noodles consists of a measly serving of only 4 miserable-looking pieces of tasteless and ridiculously super thin char siew. My wantan were missing too in this case, although I specifically asked for 'char siew wantan mee' when ordering. I wanted to check out the dry & soup version, so I ordered for a pack of each at RM 7.30 per pack.

As for the wantans, I tasted them on my 1st pack of the dry version (konlo) and it was so lousy. The noodles though springy but it was so dry that it lacks in flavour. Those tiny morsel of wantans were so soft and small that I can't even taste the meat. They must have added lots of flour instead of the minced pork that causes it to be so soft.

The art to serving a very good bowl of noodles must have 4 important criteria; the texture of noodles, the soup base to be follow by the char siew and lastly the wantan. This place has failed on 2 very important points ~ Succulent char siew together with meaty, savoury wantan. Seriously this place is so overrated till I believe that any wantan mee stalls in your neighbourhood can serve a better dish any time of the day! 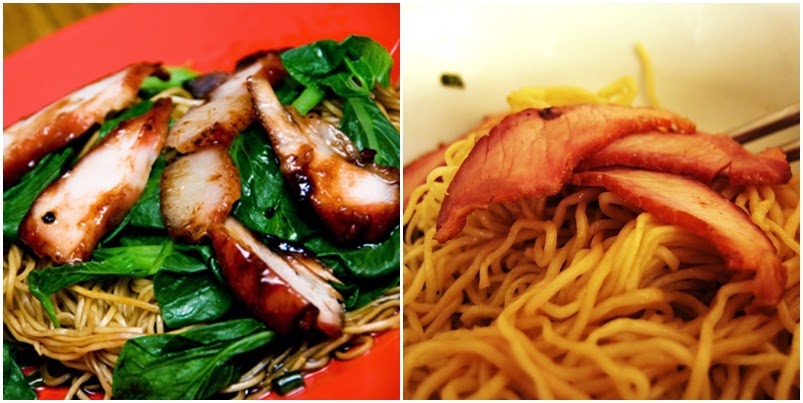 Above is a combo pic comparing the size of the char siew served in 2010 to the current year ~ 2014. Picture on the left is the succulent char siew was taken from a food blog dated sometime in May 2010, whereas the picture on the right are the ones I packed or tapau back home to eat that afternoon. 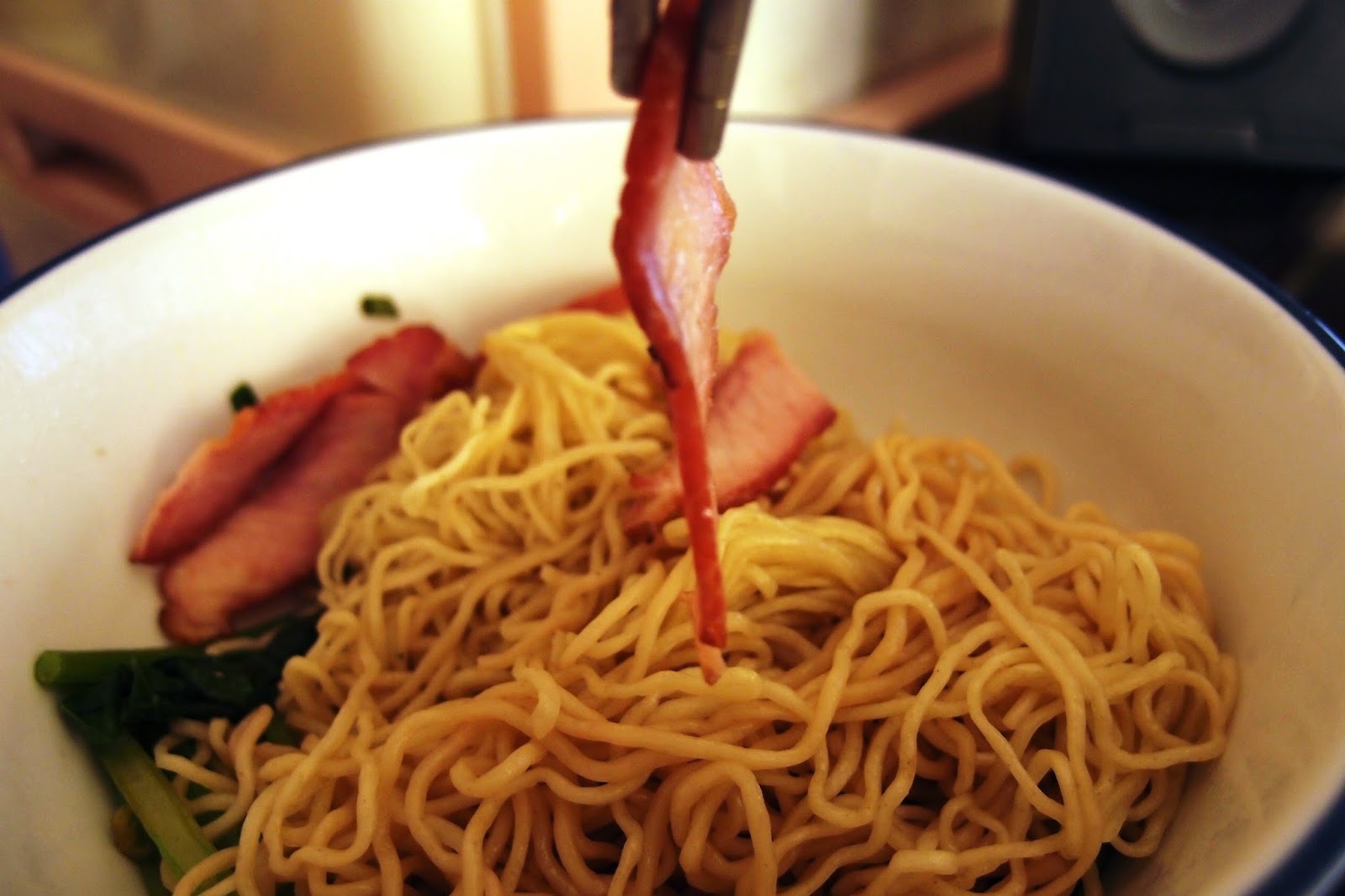 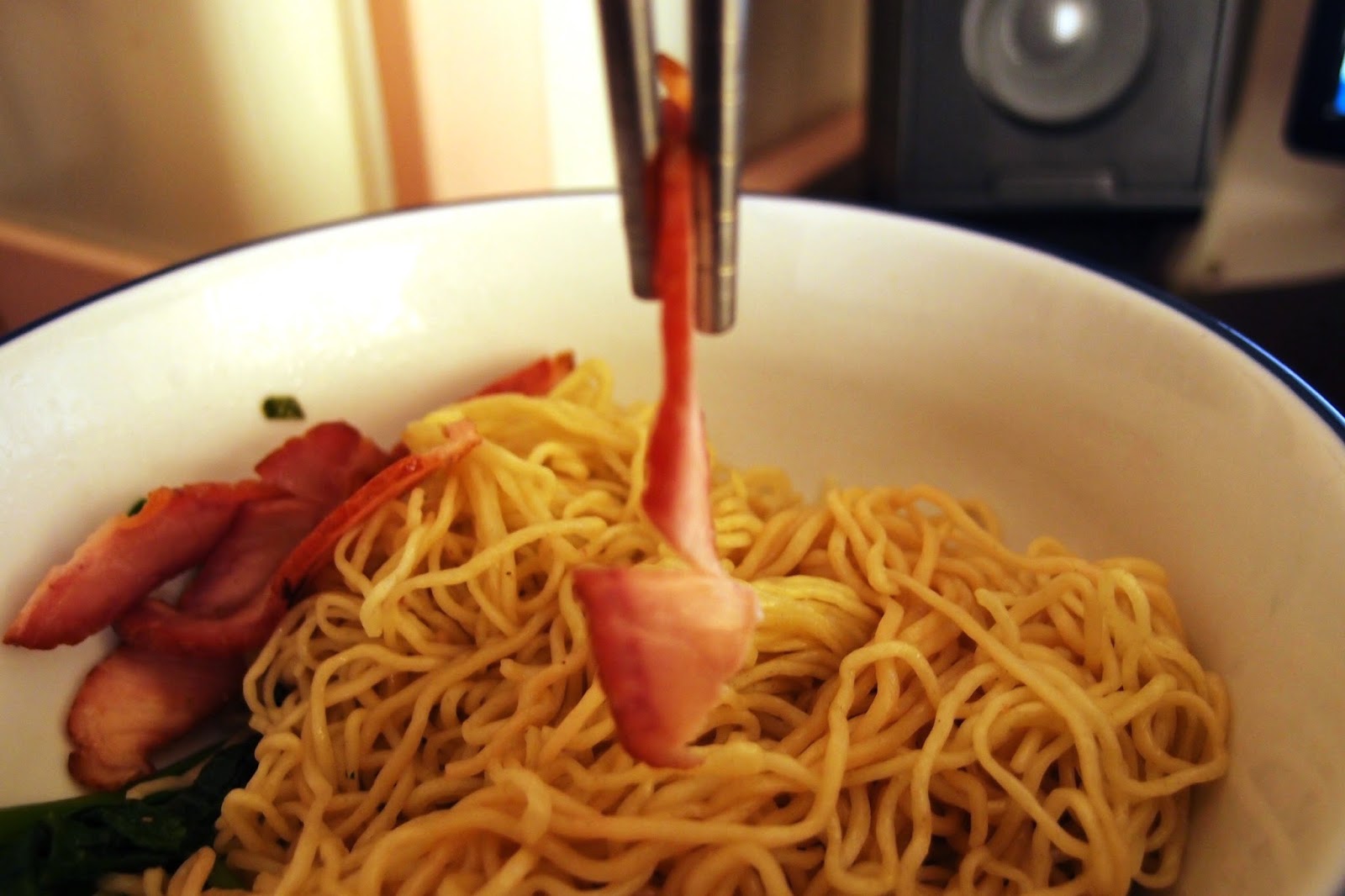 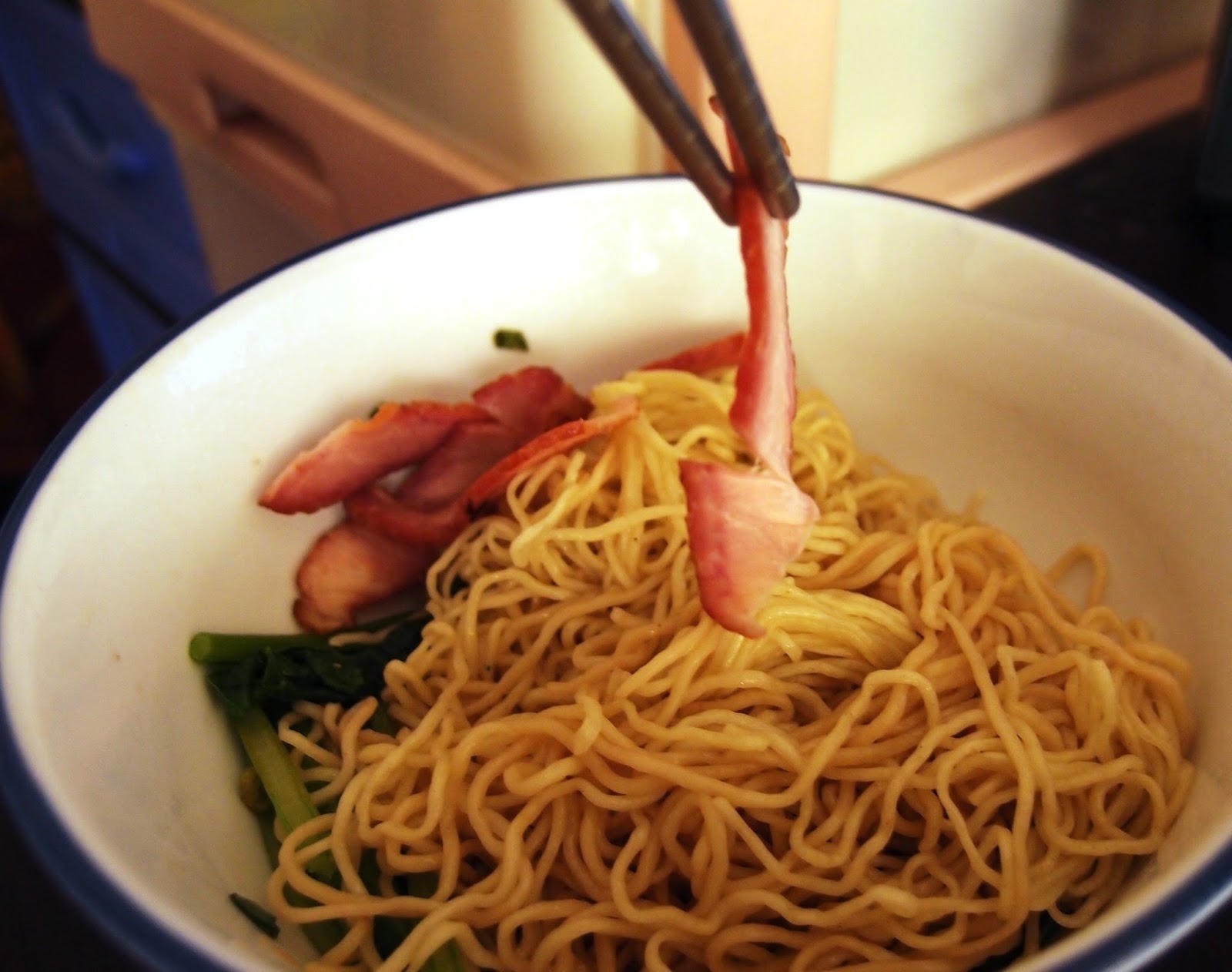 Sad to say this but they have acquired a super skill to thinly slice the char siew to paper thin size to maximise profit. What's more disheartening was that they have increased the prices from RM 5.50 in 2010 to the current RM 7.30 for a large bowl of soup/dry noodles right now.

Well, the only good I can say about this disastrous food review is that the texture of noodles were commendable. The soup was worth mentioning too, it tasted good just like any decent soup should taste like. 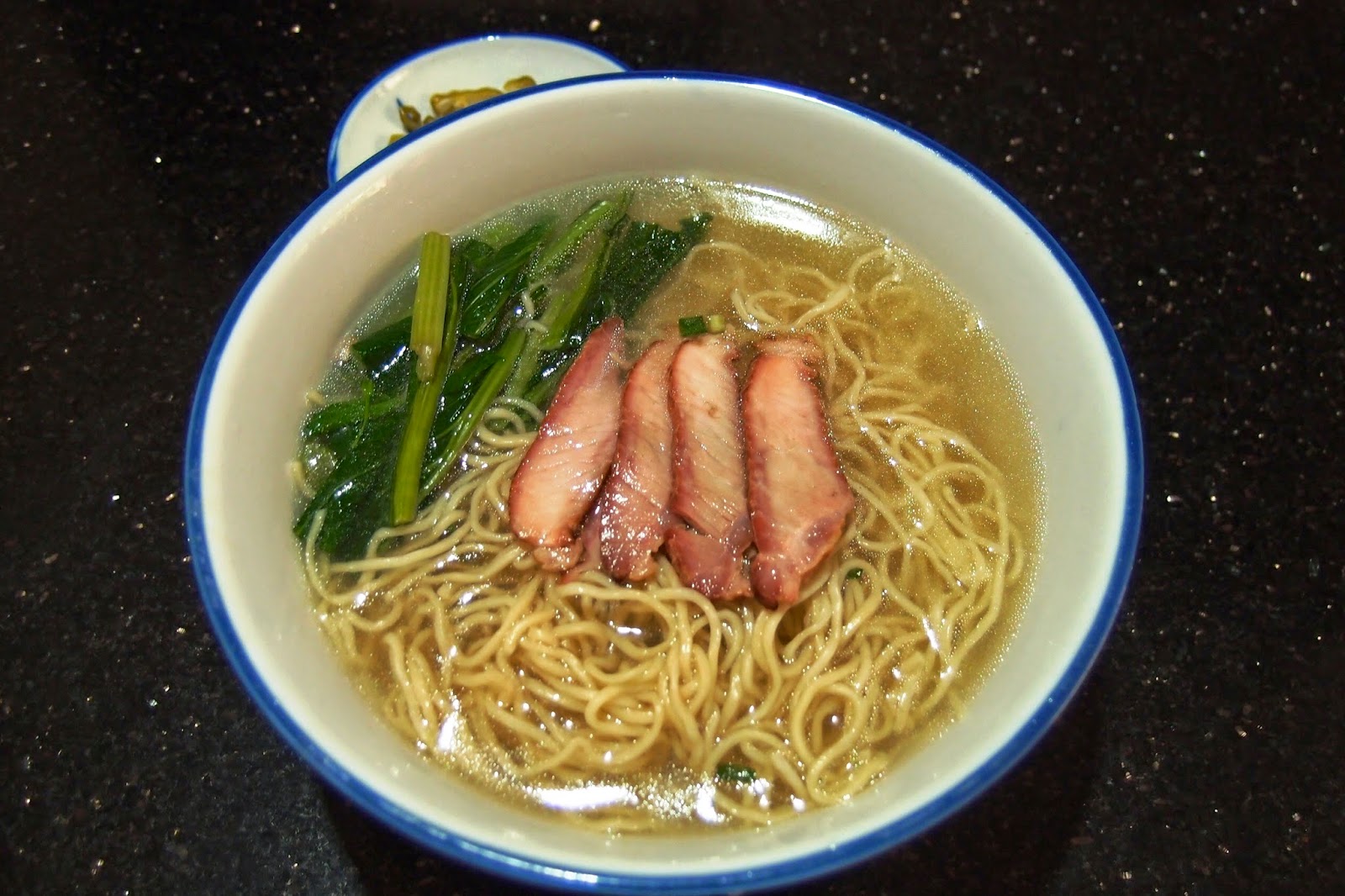 I was also being short changed here as they left out the wantan on my 2nd pack of noodles. When I made a call to complaint, the arrogant boss still have to cheek to say that I gave them a wrong order and insisting that I wanted my noodle without wantan. Instead of apologizing for the mistake his staff made, he was quick to blame his customers. 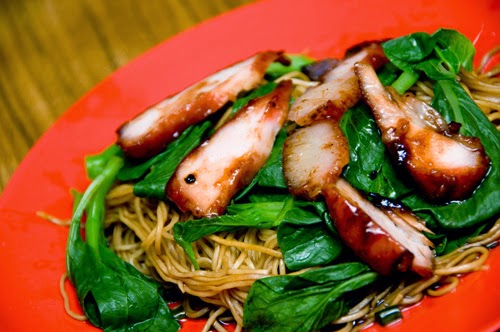 This picture taken from a May 2010 food blog too via ~ vialentino.blogspot.com/2010/05/freshly-made-egg-noodles-from-bamboo. 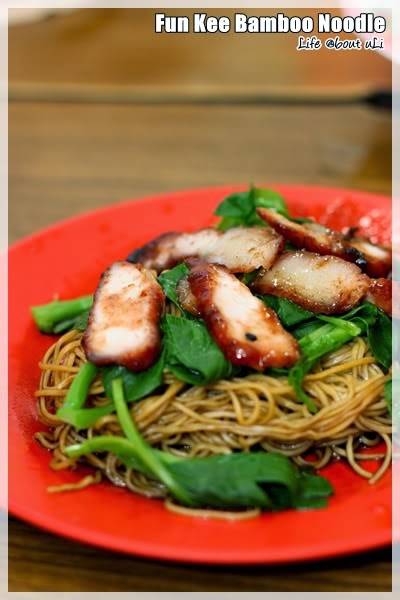 Above is another picture taken from a food review way back in May 2010 via about-uli.blogspot.com/2010/05/fun-kee-bamboo-noodle.

Overall, I had to say that I was totally disappointed and upset by the owner attitude towards his customers. Fun Kee Bamboo Noodles has been overrated by many, and sad to say they are not working toward in maintaining the quality of food served thus increasing the prices at their whim and fancy just because they are famous in town.


To maximise profit is important in any aspect of business but certainly not by cutting cost and compromising on the quality of food that been served to loyal customers for some many decades. Before I end this blog,  I just hope they stopped 'shrinking' their char siew for Christ's sake!

Posted by Auntie Lilly FollowMeToEatLa at 01:09