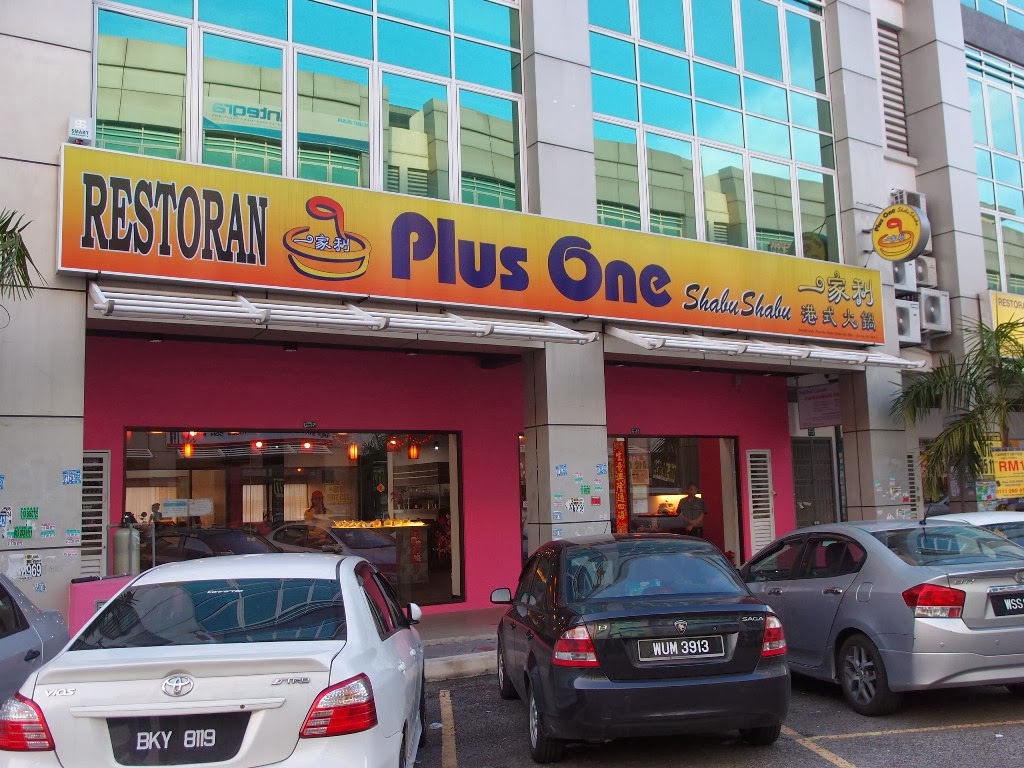 Plus One Shabu-Shabu boasts an expansive double shop lots for its customers to sample a wide selection of soups & steamboat sets. Located at the suburban Bandar Puteri Puchong, Plus One Shabu-Shabu excudes a relaxed and welcoming ambience that made it a popular dining destination both for office workers, families and residents of this strategic township in Puchong. 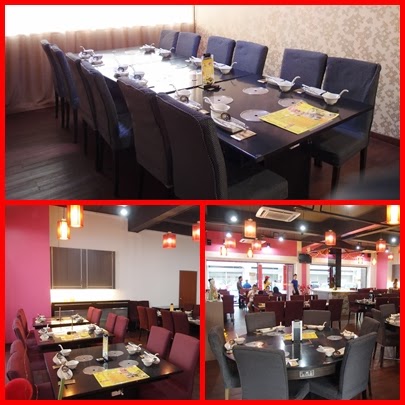 This shabu-shabu restaurant offers a comfortable and contemporary dining space for you and your friends to dine in. The restaurant stylish décor provides an intimate place for a friendly and familiar food gathering with fairly ample parking. 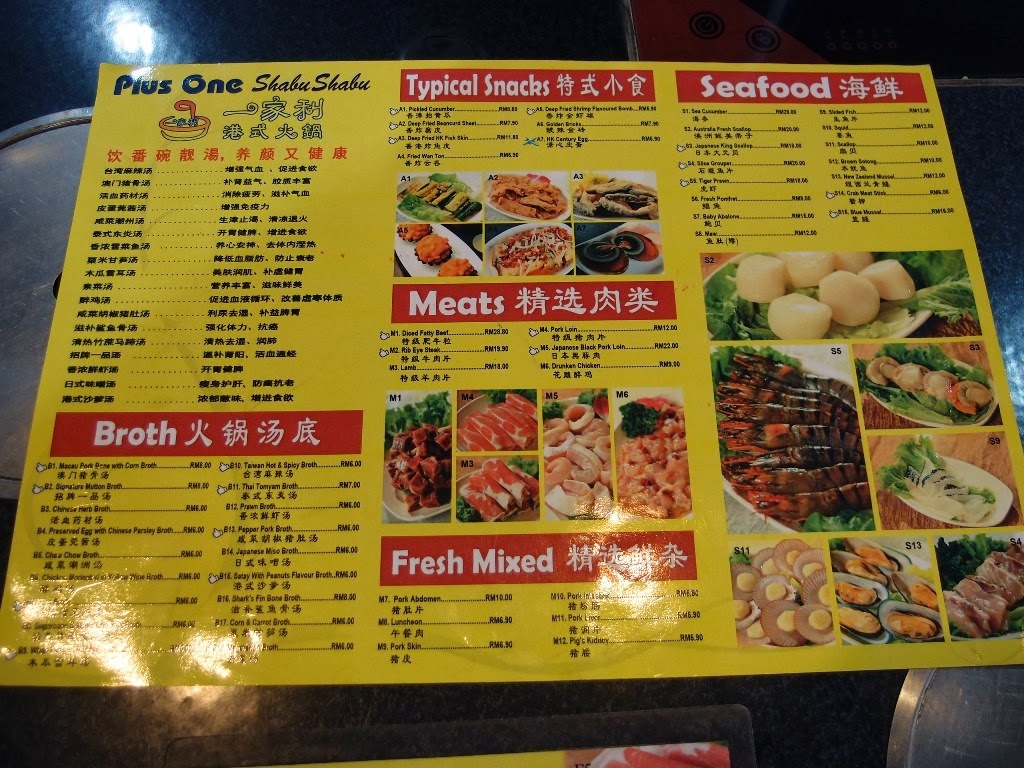 Delight yourself with variety of 7 steamboat sets ranging from New Zealand Rib Eye Set, Deluxe Seafood Set, Pork Loin Set, Pork Intestine Set, Chicken Set, U.S Mutton Set to Plus One Mixed Ball Set among others. Diners can choose from a selection of 18 fresh and of great quality healthy broths to go with steamboat set.

I was totally impressed with the wide choices of broth available. One is spoilt for choice as they offered from savoury Macau Pork Bone with Corn Broth, special Signature Mutton Broth, cooling White Fungus Papaya and healthy Japanese Miso Broth to spicy Taiwan Hot Broth, authentic Pepper Pork Broth and all-time-favourite Thai Tomyam Broth! Pricing for the broth ranging from RM6 to RM8 and comes with unlimited refill too, so you can enjoy the broth till your heart's content without worrying about the cost. 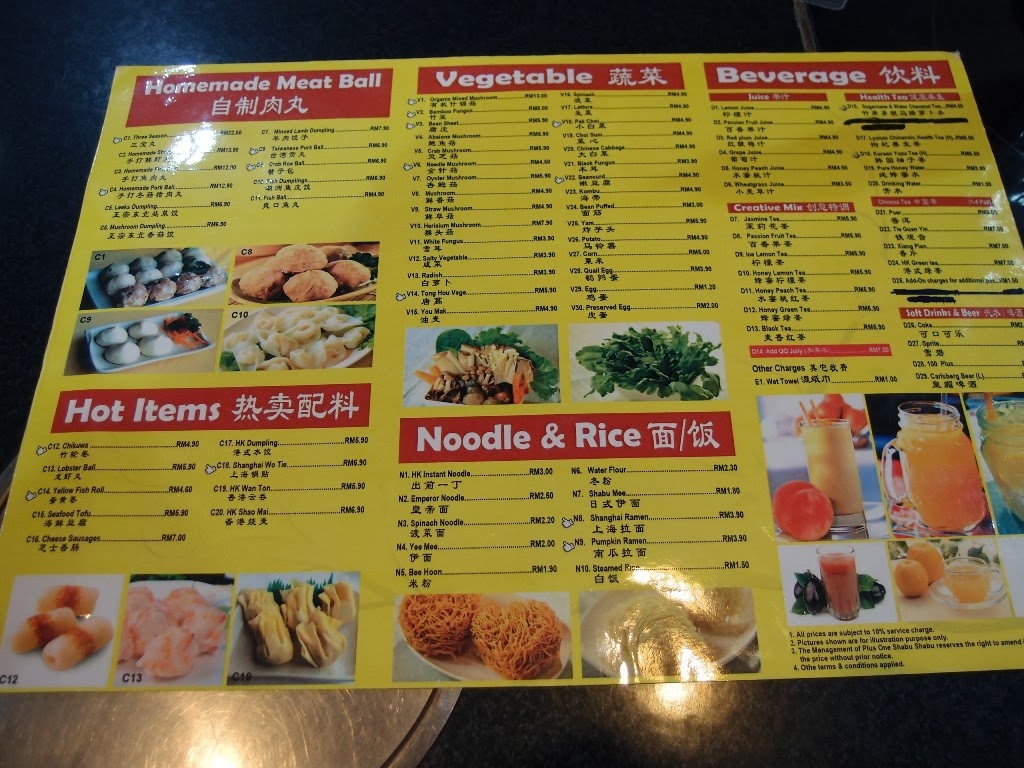 The steamboat ingredients are also available on ala carte. Diners can take their pick from the menu consisting of meats, fresh mixed seafood, home made meat ball, vegetables, noodles and rice too. 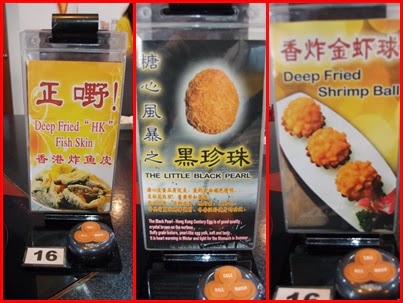 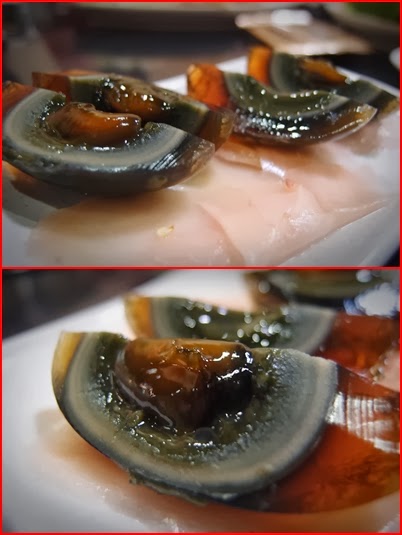 For starter, we were served some century eggs called Black Pearl HK Century eggs. I was told that the century eggs served here are specially imported from Hong Kong. Therefore, it's really something different from the local ones, and I ought to at least give it a try. Honestly, I'm not a century egg fan. With their pungent ammonia smell, they are definitely an acquire taste. I was told, Hong Kong's century eggs are a lot easier to eat than what we normally buy in supermarkets.

There is only a slight tint of that pungency, and the texture was gorgeous with the white wobbly smooth while the yolk was deliciously creamy, totally different from the local ones. The pink pickled ginger was also very delish! Sweet, delightfully sour and juicy - these pickled ginger comes in very limited amount as they are sold in batches together with the century eggs. It goes well with century eggs, complementing each other and equally delectable on its own too! 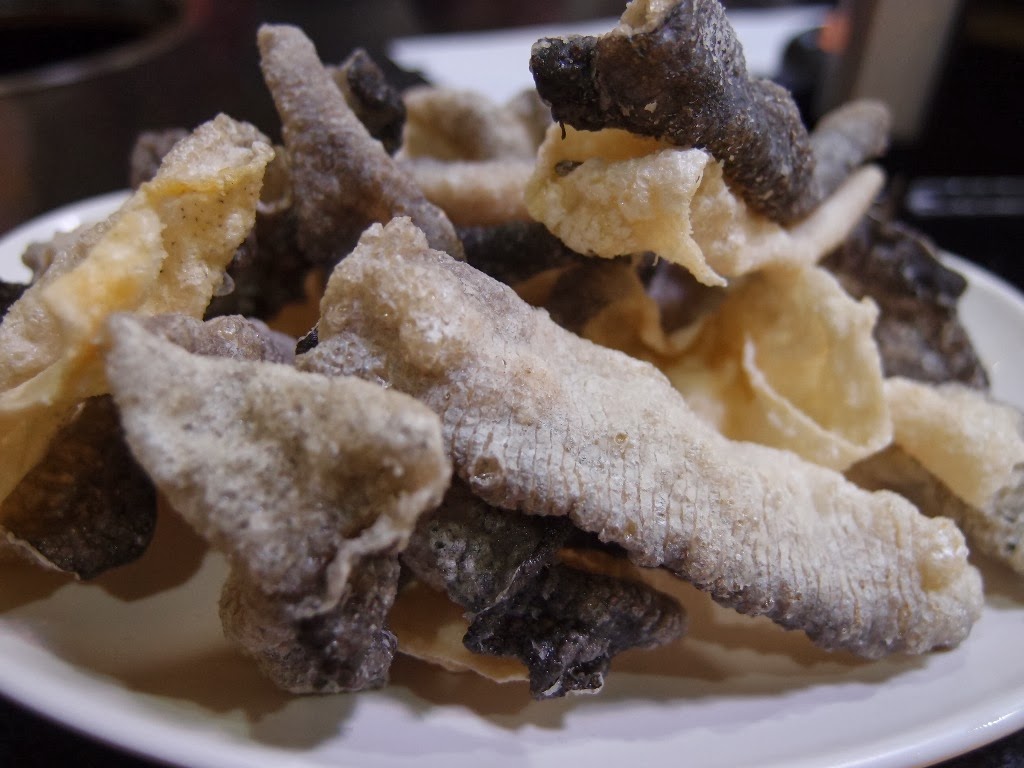 Mr Steven is particularly proud of his Deep fried HK Fish skin too. If you are looking for something crispy and nice, opt for this special fish skin that offers an interesting taste and texture. Deeply flavoured fish skin crackle and crunch with the slightest touch of the teeth. Something different, it can be eaten on its own or with the broth too. 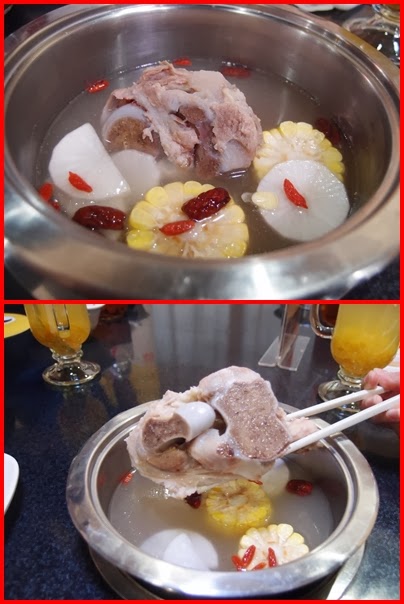 As for the broth, I have chosen the Chef recommendation; Macau Pork Bone with Corn Broth. The soup, which is clear and light, is filled with a variety of nutritious ingredients, including pork bone (big bone or tai kuat), radish, corn and wolf berries. Delicious from the start to finish, this broth goes well with the meat set especially the pork loin. 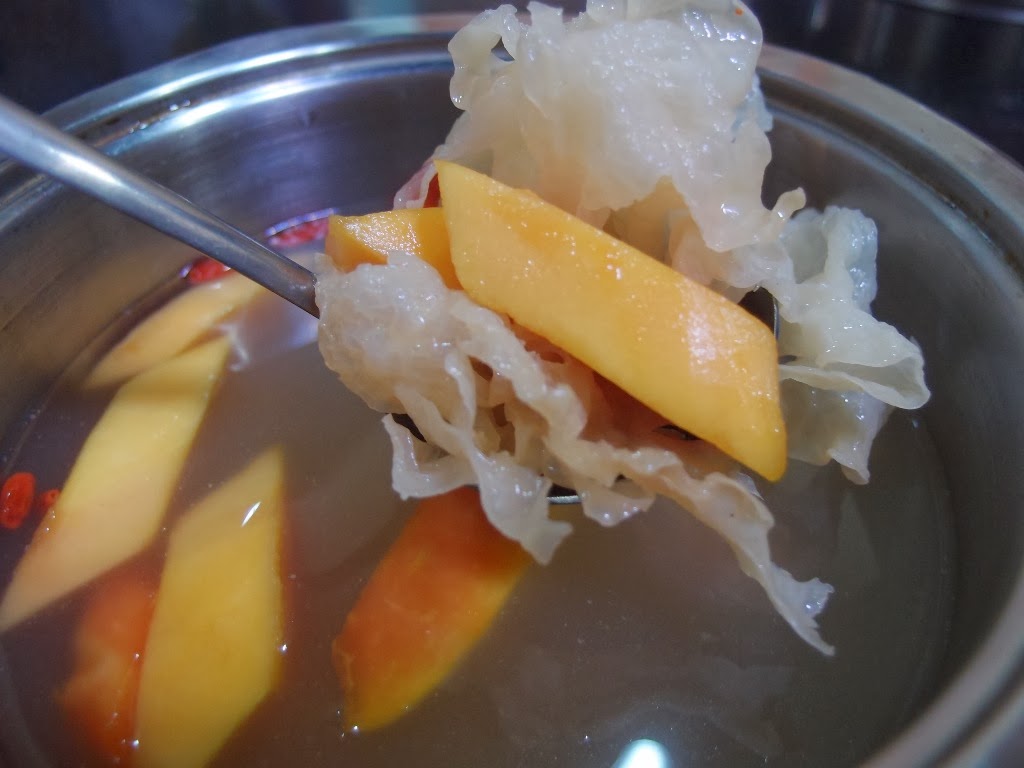 My husband who is still nursing a sore throat opted for another Chef recommendation; Nutritious White Fungus Papaya Broth. This sweet soup has many health benefits, especially good for nourishing our respiratory systems and lungs. Combination of the papaya, snow fungus and wolf berries is really tasty and refreshing. The broth get better towards the end of shabu-shabu session as more meat, seafood, vegetables are cooked in it. Tasted truly hearty and home made ... good to the last drop! 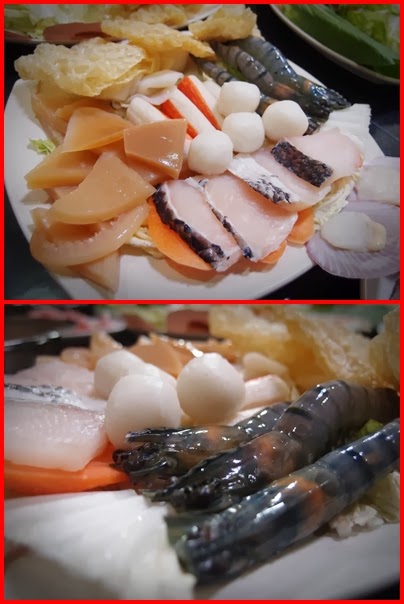 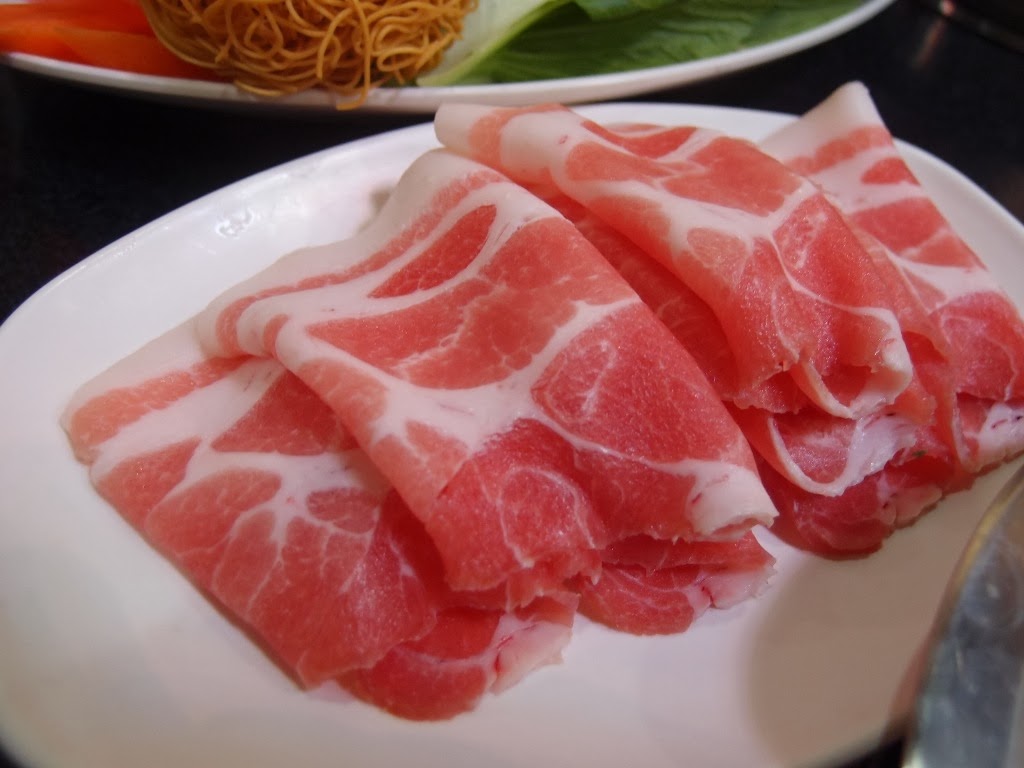 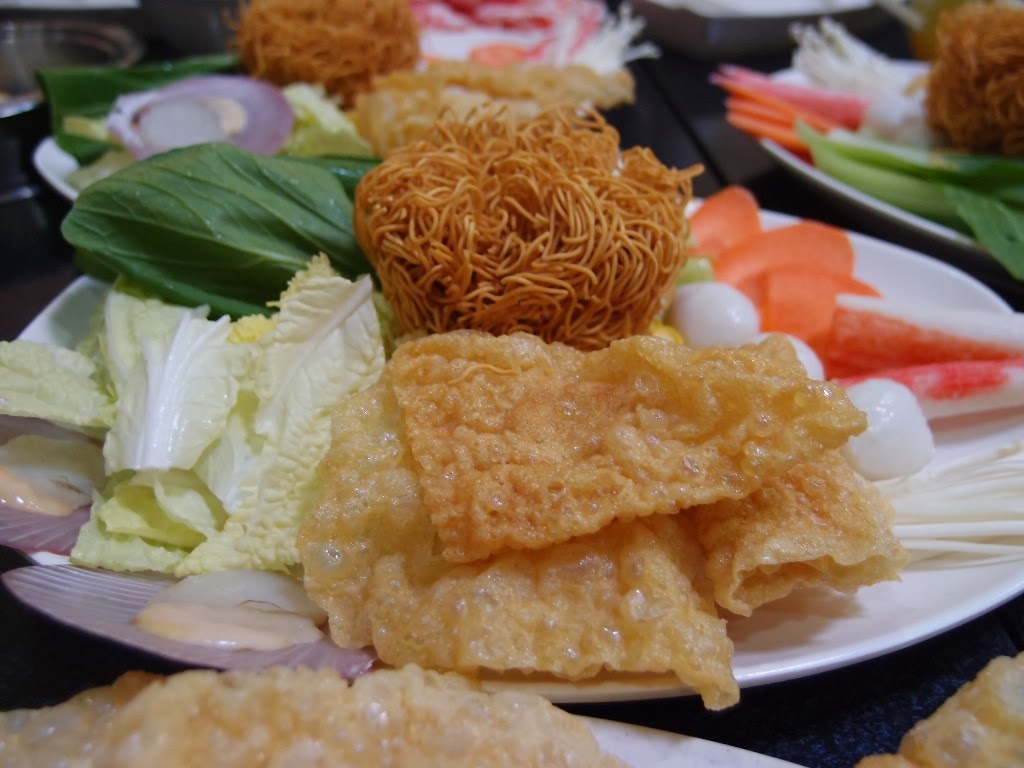 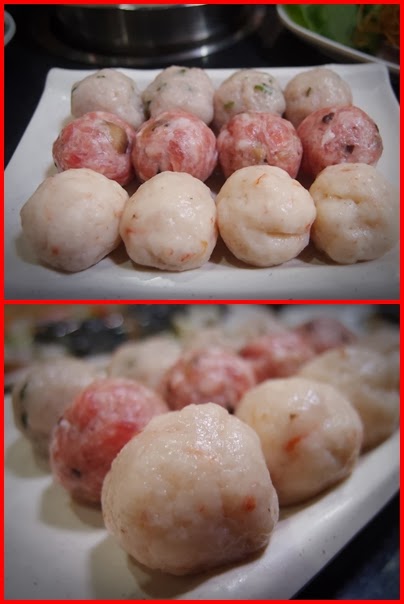 Loved these home made meat balls called 3 Seasons Meat ball. They are all freshly made to order. According to the owner, they have a total of 8 chefs in the kitchen. Each is dedicated to their own speciality; a chef for hand made meat balls, another for the making of HK fish skin, a special soup chef, a chef for the wok (tai chow), seafood chef, 2 chefs solely in charge of cutting (cham pan) and last but not least is the chef for overall cooking in the kitchen.

The prawns balls are fresh and firm while the pork mushroom meat balls are flavourful, tender and super tasty. Not forgetting the fish balls too that was made with coriander (yim sai), it had a bouncy texture and definitely taste delectable with the coriander. I can taste that the fish used is very fresh and you will love it. These meat balls is a must-try as they are really good. 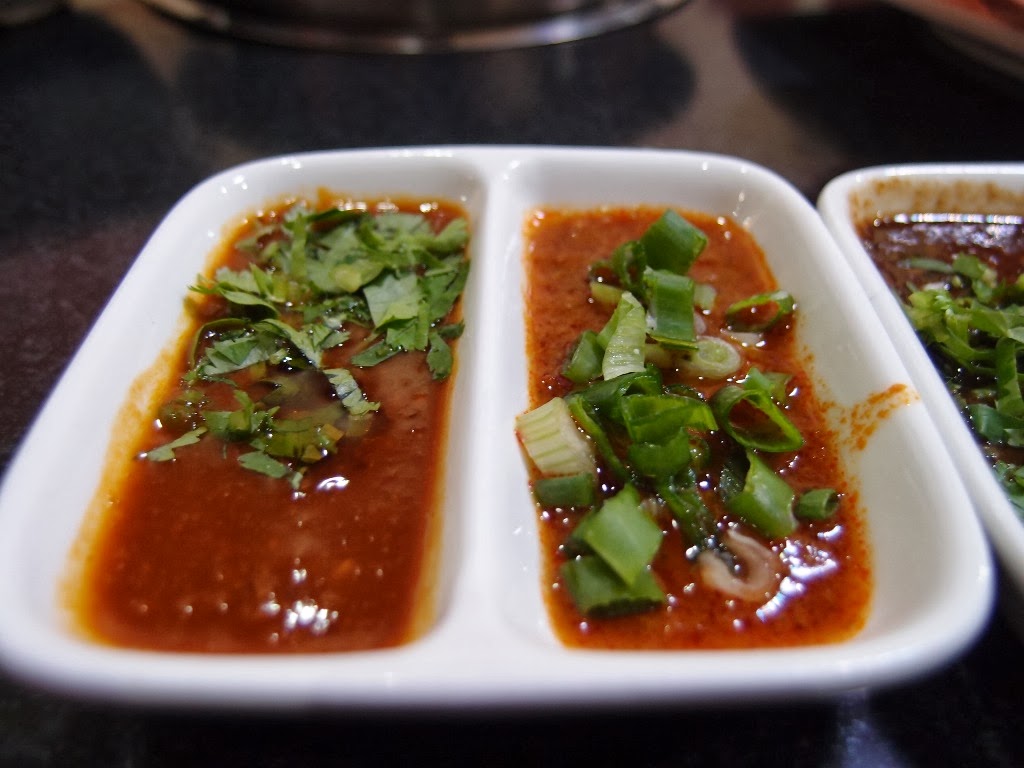 Apart from that, there are various types of home made in house sauces to choose from starting with the Fermented bean curd sauce, Hong Kong satay sauce, Sambal belacan sauce, Tomyam sauce, Sweet sauce, Hawaii sauce and Hong Kong chillies sauce. We were taught to mix & match the sauces. The Chef's recommendation here is to mix the Fermented bean curd sauce with Hong Kong chillies sauce and add a drop or two of the aromatic sesame oil with some chopped coriander and spring onions. Anyway, my personal favourite is the Sambal Belacan sauce and Hawaii sauce with lots of chopped coriander.

Overall, Plus One Shabu-Shabu is a great place to dine if you are looking for quality and taste, service is good but price wise is slightly higher that the average steamboat restaurant. Much emphasis is given on the quality of the food as everything from the soups to the meat balls are made from scratch. Head over to Plus One if you are craving for a Shabu-Shabu fix with some authentic home made broth to thrill your taste buds or freshen up your mind.