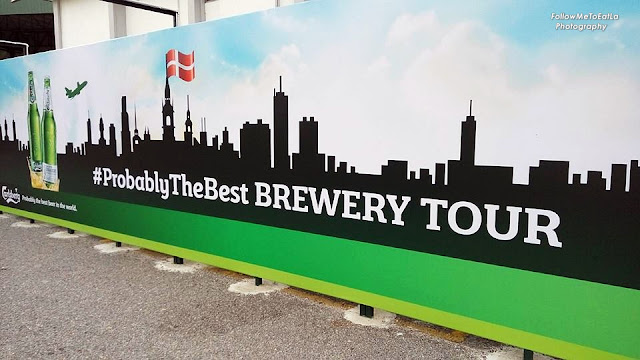 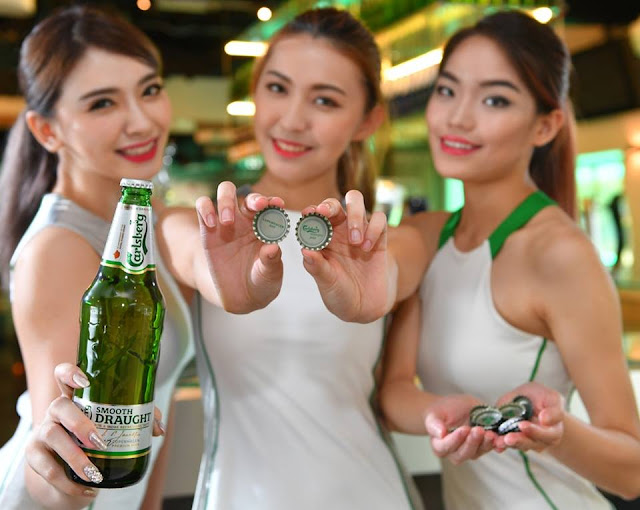 My hubby and I were super excited looking forward to our first VIP Brewery Tour Ex-Beer-ience at Carlsberg Malaysia in Shah Alam recently. It was an eye-opening experience for us as we were lucky to be part of the invited guests from the media getting a special tour of their factory for their recent Carlsberg’s 170th Global Anniversary Celebration! 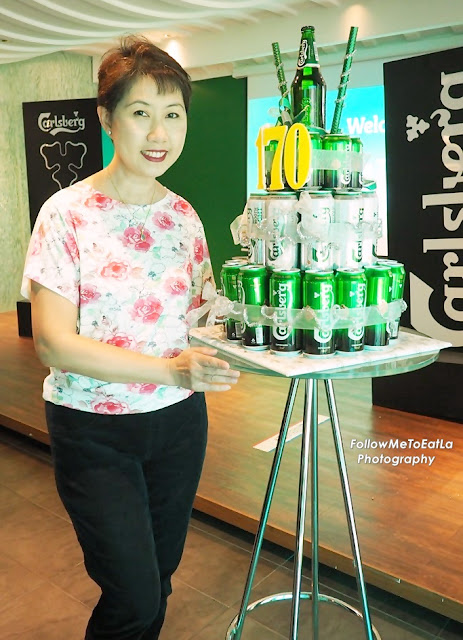 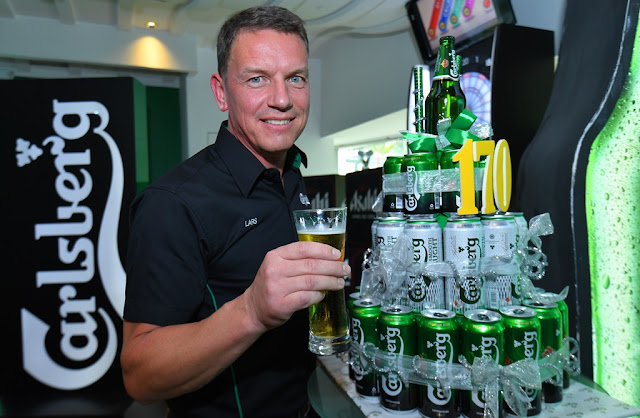 “The 170th anniversary of Carlsberg is a chance for us to pay tribute to the beer that is ‘always sharing’. It is all about the science that comes from beer knowledge and the art that brews high-quality beers from natural ingredients. Through Probably the Best Brewery Tour campaign, we celebrate Probably the Best Beer in the World, Carlsberg,” Lars Lehmann, Managing Director of Carlsberg Malaysia shared. 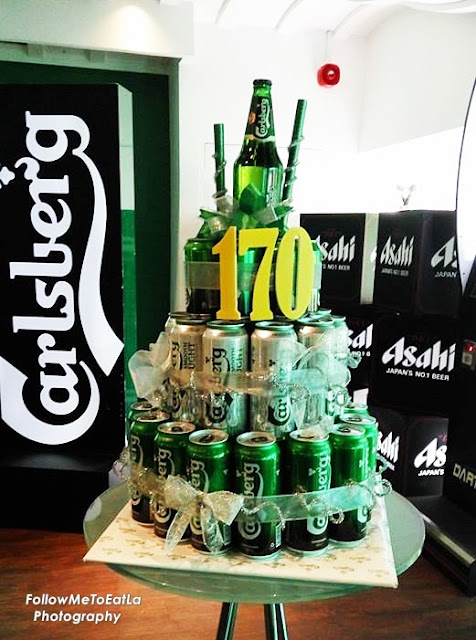 “We will reward 20 consumers to explore Carlsberg’s 170 years of beer discoveries in its homeland in Copenhagen and another 1,800 consumers to see, touch, smell and taste the quality natural ingredients of our brews through a VIP brewery tour ex-beer-ience in Shah Alam,” Lehmann added. 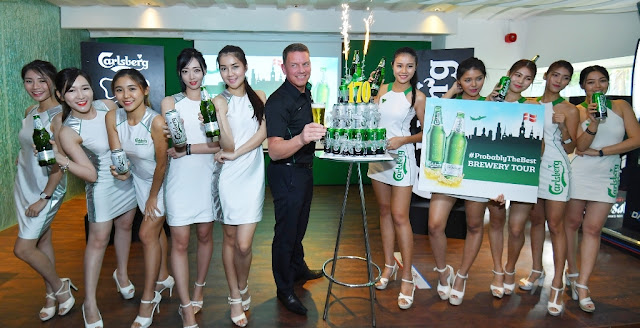 From the moment they set foot at Probably the Best Lounge, they were greeted by beautiful brand ambassadors serving buffet of welcome brews that consists of Carlsberg Smooth Draught, Somersby Apple Cider, Kronenbourg 1664 Blanc and premium Connor’s Stout Porter. Upon learning more about the Carlsberg Malaysia’s brewery and brands through an insightful and interesting presentation by Marketing Director Charles Wong, they were chauffeured in a luxury MPV to Carlsberg’s gallery at the production plant. 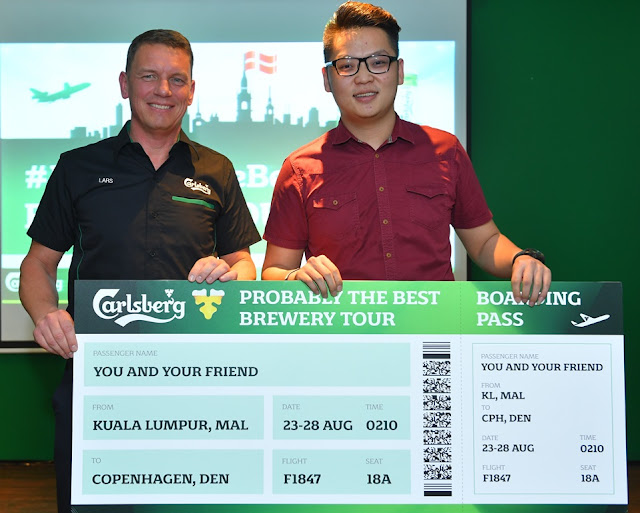 The 170 years beer discoveries and innovation Carlsberg has changed the way the world brewed modern lagers. All this because of J.C. Jacobsen’s obsession to brew the best beer in the world and share all his knowledge (and ways to stabilise Carlsberg’s special yeast called ‘Saccharomyces Carlsbergensis’). 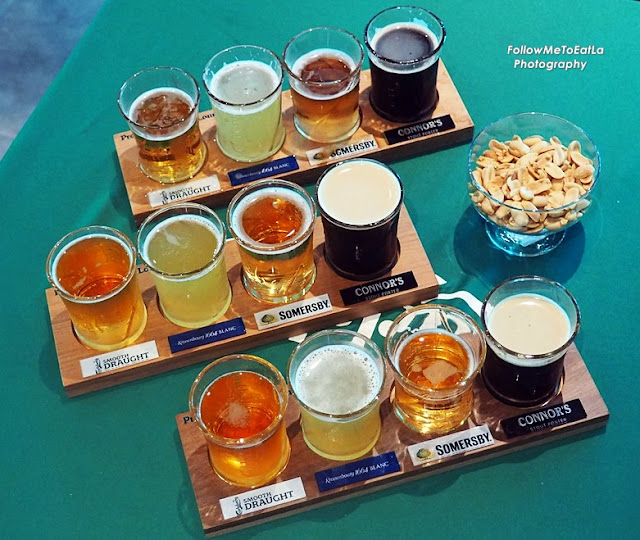 “This is an opportunity to make a toast to the beer that made groundbreaking discoveries in the beer landscape. For instance, the Carlsberg Smooth Draught, which is brewed longer for its signature smoothness with an easy finish. It is our latest product innovation specially crafted for consumers to enjoy the smooth sensation of a freshly tapped beer in a bottle or can. We are immensely proud that Carlsberg Smooth Draught is crafted here in Malaysia based on drinkers’ taste preference,” said Charles Wong, Marketing Director of Carlsberg Malaysia.

Sensory Experience To See, Touch, Smell & Taste Beer
The media entourage had the chance to see, touch, smell and taste the beer at Probably the Best Brew House – a normally restricted area. At the sensory experience room, members of the press were briefed on the aroma of hops, the taste profile of yeast and the look of beer liquid with and without purification. 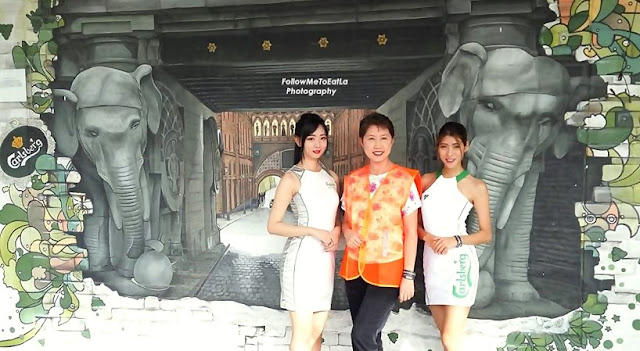 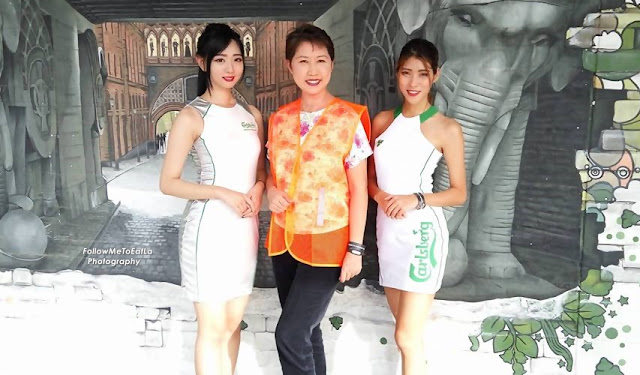 Posing With Carlsberg's Models Before Entering The Factory 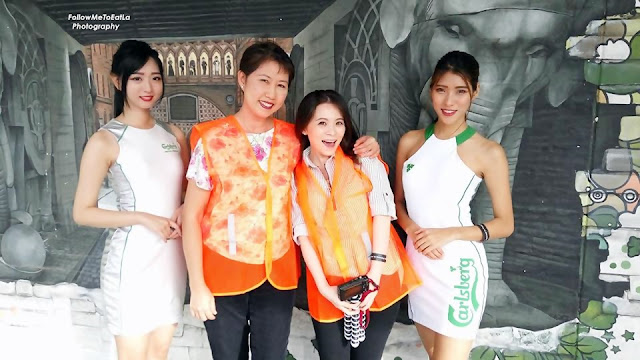 Guests were led on a guided tour which started at the Visitor's Gallery to learn of the history of Carlsberg and its founder J.C. Jacobsen, as well as the beer making process 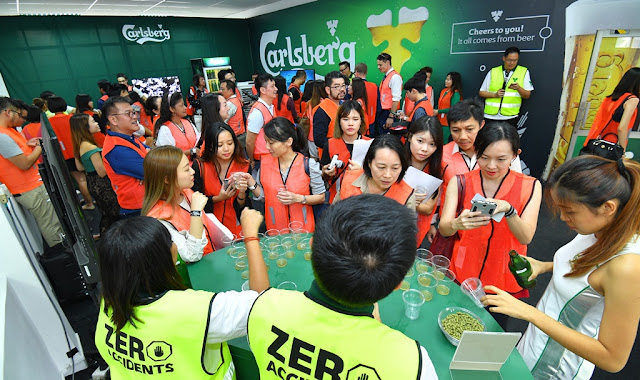 A sensory experience where guests can see, touch, smell and taste beer which is made from natural quality ingredients namely malt/barley, hops, yeast and water 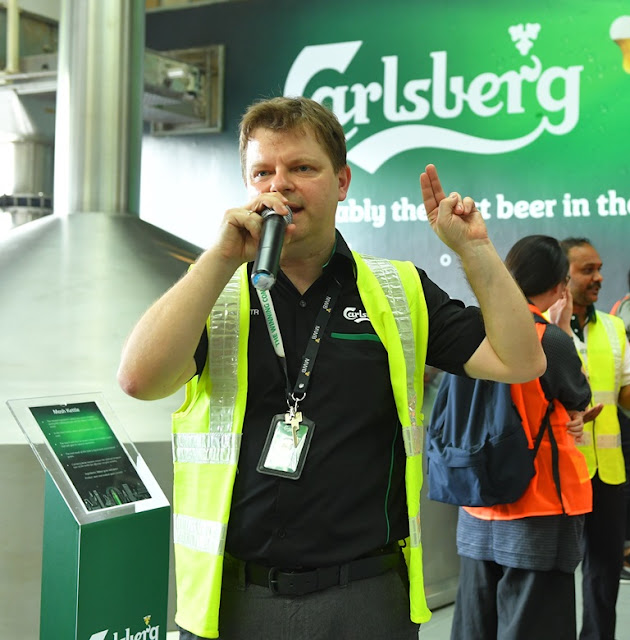 Video Of Beer-Making Process In The Factory

The Bottling Process In The Factory

"While many know that wine comes from grapes, "very few actually know that Carlsberg beer comes from natural quality ingredients – namely malt/barley, hops, yeast and water," said Zajac. “Inviting consumers into our brew house to learn more about the natural quality ingredients and the art of brewing, bottling and packaging is an excellent way to showcase our brews."


Partying The Night Away At Probably The Best Lounge
Of course, it wouldn’t be a birthday party without fun-filled games and beer-tertainment. Members of media enjoyed the newly upgraded Probably the Best Lounge, learning more about Carlsberg beer from the Carlsberg heritage and art of making beer wall murals, playing the electronic dart machine iDarts and electronic beer-table tennis iPong as well as belting out favourite numbers on the Karaoke machine too. 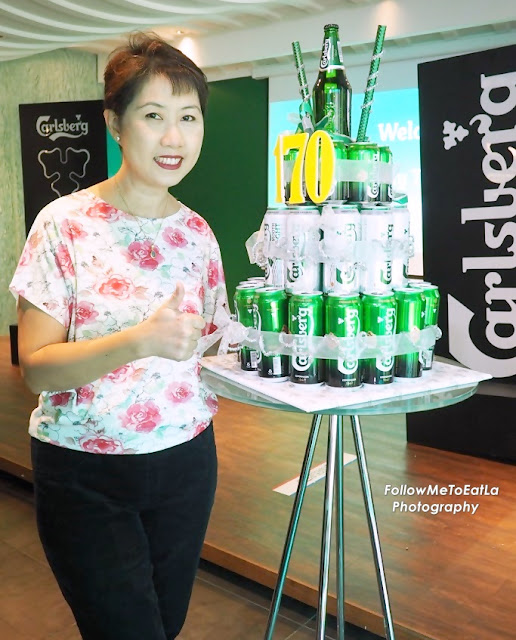 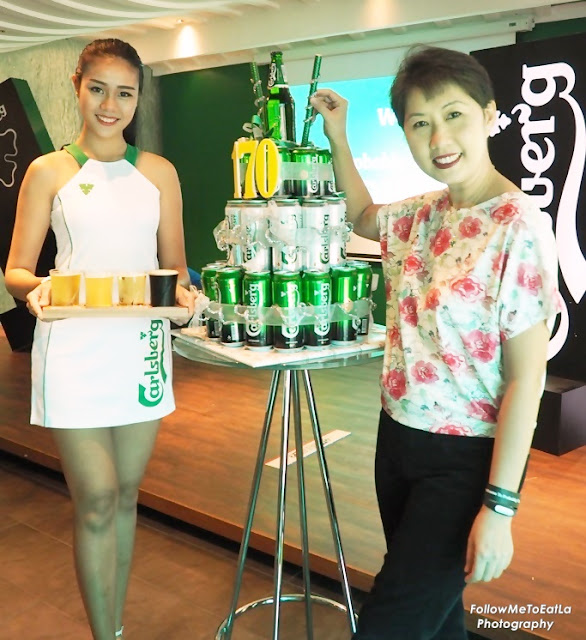 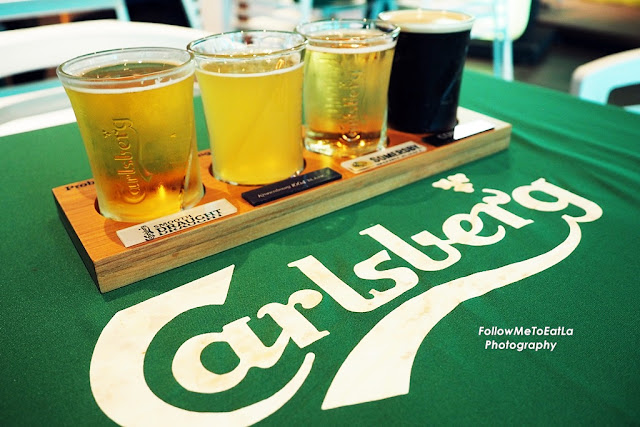 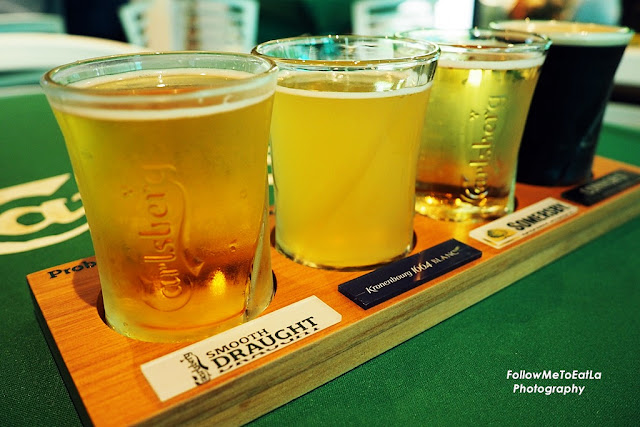 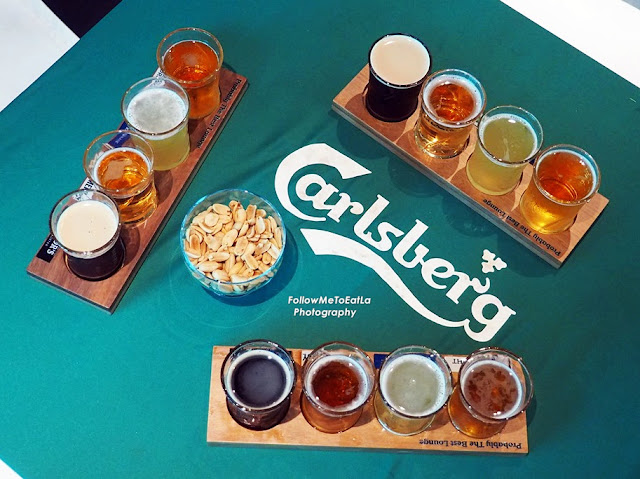 They also indulged in beer-infused gourmet spread that consists of sautéed penne pasta with trio mushroom and K1664 Blanc cream sauce, roasted chicken wings with Carlsberg pineapple BBQ sauce, Connor’s goulash lamb stew and more. Some took up the challenge and participate in beer-related quizzes while some learned how to pour themselves a perfect pint, enjoyed a night long of probably the best ex-beer-ience.

When Carlsberg does a VIP brewery tour, it is #ProbablyTheBest!

Posted by Auntie Lilly FollowMeToEatLa at 19:45