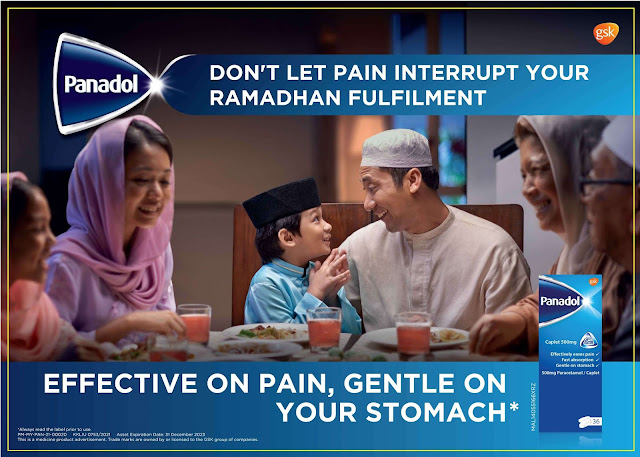 Panadol, GlaxoSmithKline's (GSK) flagship brand, launched a heart-warming digital short film titled ‘Ketua’, to commemorate the significance of having a spiritually fulfilling journey in the blessed month of Ramadan. The 2-minute long short film stayed true to the brand’s purpose and focused on the virtues of kindness, generosity and devotion – which are intrinsic to Ramadan.
Centred on doing good and selfless deeds for loved ones and to any person in need; the short film shed a light on a single father, ‘Abah’, who stepped up into a bigger role of fulfilling his responsibility as a devoted son and a role model to his child during the holy month of Ramadan.
“The short film ‘Ketua’ was inspired by the spirit of Ramadan which focuses on sharing and caring for people around you. These noble values were beautifully told in the ‘Ketua’ short film, where Abah is seen to be doing all the deeds for his family out of care & love,” said Bryan Wong, General Manager of GSK Consumer Healthcare Malaysia.
During the holy month of Ramadan, fasting is an obligatory practice for all Muslims from dawn to dusk. In the short film, Abah managed to endure the busy day with positivity and optimism; finding balance in devoting his spiritual reflections and increase his faith, while offering assurance and help to his family in their day-to-day responsibilities.
“We understand that headaches can often be triggered during the month of Ramadan, especially when adjustments were made on sleeping patterns with increased stress on house chores or at work too. Through this digital short film, we want to remind our consumers to not let headache get in their way of fulfilling the true purpose of Ramadan. Panadol is here to support them when they need to relieve themselves of pain. It is not only effective on pain but also gentle on the stomach, making it an ideal solution during Ramadan.” Wong added.
The short film is scheduled to air across all Panadol social media channels YouTube, Facebook and Instagram from 24th April 2021.
The short film can be watched at: https://www.youtube.com/watch?v=n8jLva66Iy
Posted by Auntie Lilly FollowMeToEatLa at 12:23